In clearing out the attic so we can convert it to a bedroom for our big girl I came across a lovely bag of scraps left over from a wedding dress I made a while ago. (Thanks Emma!!!!) It was cut on the cross so there were some largish pieces and the munchkin received a tie dye kit for Christmas so I thought “Perfect, this lovely silk will be perfect to tie dye”

I soon realised that if I was especially careful I might get a top for me too so after some crafty cutting I did just that! 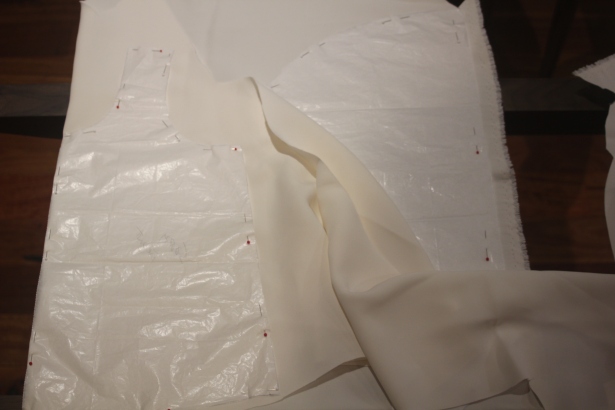 I used a singlet top pattern I drafted a while ago and I managed to get the front of the munchkins on a fold but the back has a seam down the middle, neatly top-stitched of course!

The skirt of the wedding dress was cut on the bias so there were long stretches for me to cut some bias strips and I used these to bind all of the hems. I love bias binding, I think it is a really nicely finished look.

In fact this top turned out so well that my little munchkin decided its too nice to tie-dye, although I’m not ruling it out for now. I figure that by the time its got a watermelon juice stain down the front and a grass stain on the back she might change her mind. Hehe.

So, this is my top. I used a Burdastyle pattern from Issue 8/2009. I basically just searched through all of my patterns and pattern books to find a pattern that used the least amount of fabric. Its meant to be cut on the fold but that wasn’t possible and I had to cut each of the four pieces out separately. I didn’t have much in the way of selvage to measure from so I have no idea if its on the straight of grain but it doesn’t sit funny and I don’t think you can tell that its probably a bit wonky. Lucky this fabric is the same front and back and theres no way of telling which way is up or down!
I also made the neck a little bigger than the pattern so I could just pull it over my head. The original pattern had a front closure and a neck-tie.

Yep…. I’m feeling pretty smug that I managed to get two tops from a bunch of scraps and it really is beautiful fabric, it would have been a shame not to have worked something out.

Some beautiful silk crepe from I’m not sure, cotton, pattern 108 (minus the tie and front closure) burdastyle 8/2009